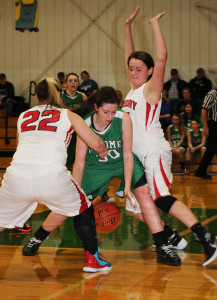 The Colome girls earned fifth place at the Southern Plains Conference tournament by beating Kadoka Area 54-50 Saturday in Murdo.
Taylor Hrabanek led the scoring with 19 points and 10 rebounds. Callie Heath had 12 points and Mariah Kinzer, 8.  Hrabanek had 4 steals and 4 assists. 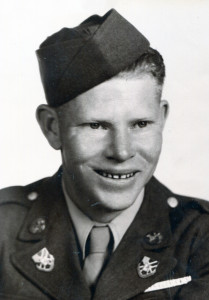 On December 20, 1949, he was united in marriage to Gloria Jean Lively in Winner, SD. The family moved to Sioux Falls in 1952 where Roland was an electrician until his retirement. Roland was a lifetime member in the IBEW, International Brotherhood of Electrical Workers and the VFW. 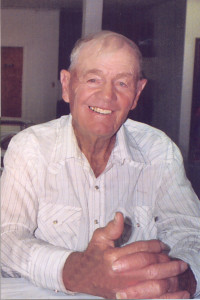 Frank “Frantz” Chris Moeller, Jr. was born to Frank Dell Moeller Sr. and Elise Moeller on March 5, 1919 on their farm north west of Witten, SD. He had 4 brothers and 2 sisters-Ray, Roy, Willie, Dick, Amelia, and Betty. He was the oldest of the boys.

Frank “Frantz” was most known by his family and friends as Franny. He started work at an early age of 5 years old where he had to milk 5 cows and then walk 1 mile to school. 20 years later, Dave Powell and Franny would scoop 7 truckloads of grain a day and at night they would put the racks up and bring Prairie hay home for the milk cows. Franny felt guilty seeing Dave’s wife milking cows late at night, so he stayed and helped with that chore before he went home. The pay back in those days was $1.00 a day, but Franny got $2.00 for he worked long and hard, and he continued to work like that the rest of his life. If someone was in need of help (broke down, out of fuel, stuck or whatever) he would lend a hand and never take a penny from them, that’s the way Franny was, just like his good neighbors Gay Rowe and Orville Smith.
Franny was drafted into the Army in 1944 and while he was in Berlin, Germany, one of his comrades had asked Franny to accompany him on a ride to somewhere and that is when he met Gen. George Patton and got to shake his hand shortly before Patton was killed in a Jeep wreck. Franny said Patton had just woke and only had on a T-shirt and shorts on. After Franny finished his tour of duty, he returned home and that’s when he met Esther Smith in the Big Front Bar in Witten and later married her in 1951. To this union came his boy Kyle Chris and Esther’s children, Sharon and Robert, which he took as his own.

His daughter Sharon loved him dearly and called him almost every day up until the time of his passing. (Sharon cannot be here with us at this time of our loss, for her husband needs her as he is in the late stages of cancer. Sharon and husband Norman are in our thoughts and in our hearts.)

Franny and Esther started out farming raising 300 chickens and 500 turkeys and later bought 3 guilts and their farm grew from there with a lot of love and hard work, something Franny was not afraid of. If someone worked hard Franny was sure to acknowledge them and respect them. Later on in the years Franny got into raising cattle and enjoyed every bit of it. Working on his farm made him the happiest and he had the best work ethics.

Franny is known most for being honest, genuine, and a happy down to Earth person. Now Franny also had quite a reputation for being one of the strongest men around with his extra-large hands. He was never beat down in Arm Wrestling. On the ship he took to Berlin, Germany, he arm wrestled 12 men a day for 14 days and was never defeated. He would be known to take a little break and go into town once in a while, enjoy a few beers, and get into a few bar fights. He said that’s the way it was back in the day.

2 months before his passing he said that if he could only walk to his truck and get in it, that he could still be able to do a lot of good here on the ranch. Franny broke his hip on Jan. 9, 2014and tried so hard to recover and walk again, almost succeeded that same summer when he walked into the Cowboy Up Bar in Witten with the help of a walker and was met by family and friends greeting and encouraging him. You should have seen the grin on his face. Although that was short lived when he developed pneumonia which knocked him down dramatically and he never recovered his strength to walk again.

Franny was one of the most respected and loved man and will be greatly missed by all of his family and friends. If there were more Franny’s in this world it would be a better place for all. He passed away on January 19, 2016 at 8:12 PM in his home with his family on each side of him. 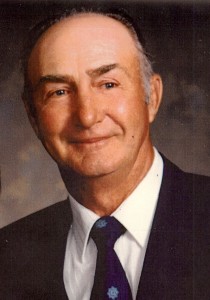 Louie (Bud) Karel Jr. was born at home on a farm south of Gregory on February 17, 1922 to Louie Sr. and Flora (Bruns) Karel. Bud attended first and second grade at the Carlson School, grades three thru six at the Saathoff School, and Jack School in grades seven and eight. He went to Colome High School and graduated in 1941. He assisted his parents on the family farm during these years.

Bud entered National Youth Association Welding School in Sioux Falls for an 8 week program in 1942. He then moved and became a welder at Seattle Tacoma Shipyard working on destroyers until 1943. His friends Russ Shirie and Virgil Aden went with him.

Bud enlisted in the US Navy on July 23, 1943. His honoree activity was commando North Pacific in 1943-44, Aviation Mechanics Carrier in 1944-45, and Planes AM2/C. Bud served with combat troops as an Honor Man due to his marksmanship. He was part of the Marines where he did his training at Alamedco, CA. Louie served in the Marshall Islands, Roi-Namier, and Gilbert Islands. He recalls servicing the Enola Gay—not even knowing it was loaded with an atomic bomb. Bud was honorably discharged on February 4, 1946.

Bud returned to the farm and farmed with T.J. Brewer. He bought a DC Case tractor, a corn sheller, and a thrashing machine. In 1947 Louie batched with Harold Elliott on Powell land south of the farm. In 1948 Bud and Harold moved to the Holger Cassling place—now the Krizan place.

In 1948 Bud and a friend, Joey Papousek, brought a load of cattle to the stockyards in Sioux City. This is where Bud became acquainted with Ardyth Warnkvist. Later that summer on July 4th they attended a street dance in Gregory. At Christmas time the young man gave her a diamond ring and they were married on February 7, 1949 at Elkpoint, SD by the Justice of the Peace. Virgil and Rose Aden were their attendants with Harlan Warnkvist driving the car.

Bud and Ardyth made their first home on the Holger Cassling place three miles west and 2 miles north of Dallas. They began farming together and in the spring of 1950 they had an opportunity to move onto the Ben Doering homestead west of them. They soon bought this farm and it became home for their entire lives.

On the home farm they raised three children, Gary, Sandy, and Jim. They were good neighbors and had many good times playing cards. The yearly mountain oyster feed was a neighborhood highlight. Bud loved all sports whether following his boys in high school sports or watching the Vikings. Louie enjoyed hunting deer and pheasants. After WWII he and his war buddies would make an annual event hunting together. It was just a good reason to get together and tell stories. Bud had a big heart for animals especially dogs and had several great cattle dogs through the years. Bud would train the dogs to watch an open gate or to round up the cows in a pasture. Bud could be seen with his dogs on the four-wheeler or in the 1974 Green Machine his pride and joy.

Bud served as clerk of Irwin School District #23 from 1949-68. He served on the Rosebud Farmers Union Board of Directors from 1969 to 1987. He served on the Irwin Township Board for several years and was a member of the Colome Legion for 69 years.

Bud was a loving family man. He treasured the times that he could spend with his grandchildren.

Bud passed away on January 21, 2016, with his three children by his side, at Avera Gregory Healthcare center at the age of 93 years.

Tumbling crude oil prices around the world have helped send the South Dakota retail average price for gasoline to $1.86 per gallon, nine cents lower than the price a year ago and 12 cents below the price one month ago, AAA reports. The price average in Rapid City is 47 cents more than the price in Sioux Falls.

National retail gas price averages have fallen for 63 of the past 74 days, for a total savings of 34 cents per gallon, reaching today’s price of $1.88 per gallon. Gas prices are down seven cents per gallon on the week, which is the fastest pace gas prices have dropped since the middle of November. Motorists typically enjoy falling gasoline prices in early winter due to decreased demand for gasoline and that also is helping to push prices downwards. Despite recent declines, the national average price of gas is only 18 cents per gallon cheaper than a year ago since prices also were very low in early 2015.

Sarah Calhoon of Ideal has been named to the fall semester dean’s list at South Dakota State University. Calhoon is in the pharmacy school.

Sarah Shippy of Colome was named to the fall semester dean’s list at the University of South Dakota.

Area students have been named to the fall semester president’s list at Mitchell Technical Institute.

Area students have been named to the fall semester dean’s list at Dakota Wesleyan University, Mitchell.  Named to the list are: 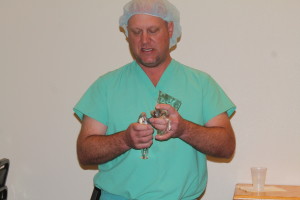 Winner Regional Healthcare Center now has the services of an orthopedic surgeon who comes here every other week.  Dr. Bryan Scheer explained the services he provides at a lunch and learn meeting Jan 13.

He helps patients with joint pain, sports medicine and general orthopedics.  As a surgeon, he explained he does a lot of knee scopes plus performs total knee and hip replacement.